[a little bit of everything]

so these past two or three weeks God has been moving in our lives. i say moving because i'm not sure yet what He's up to...but I know this...God is always moving.

some of you who read this may know that in January i started up my own freelance graphic design business. its called simpleroot media. (www.simplerootmedia.com). for us crazy designers, it only took me about 5 months to get my website up to a place where i'm satisfied with it, along with my logo. i think i re-did it 4 or 5 times....often at the amuse of my husband.

all thats to say, God's been doing some really neat things with my business, and just within the last two weeks i've gotten 3 new clients. how cool is that!! i'm pretty pumped and excited about it--i love designing! its what i was made to do! (well, part of the time)

another cool thing lately is that i got my hair chopped. yes, that's right folks...shorter than i've ever ever gone before. (photo below). at first i was a little freaked out about it, but now its growing on me. i think i even like it now. peter thinks its adorable, so really thats all that matters. 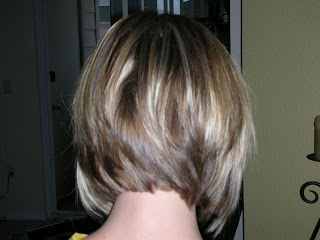 oh, and i just had to include another reason why this time of the year is awesome....FOOTBALL! i'm pretty pumped about it. i even got a comment today from one our associate pastors "gotta love a chick who knows the football schedule" yup, sure do. 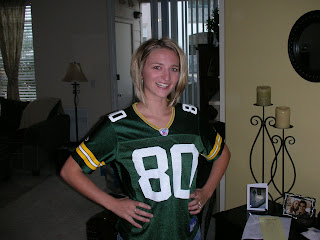 well, peter has promised me that he'll be adding a post here shortly regarding his much anticipated and highly sucessful fly fishing trip he took a few weeks back. i'll leave him to tell you the rest.

all our love,
s&p
Posted by Peter & Sarah Barber at 3:34 PM 1 comment:
Email ThisBlogThis!Share to TwitterShare to FacebookShare to Pinterest

ok friends. i owe you another apology. we haven't stuck to our guns like we promised. if it helps, in the last month we've moved, moved and moved, and the BLOG updates kind of took a back seat.

well, here's what i've got for ya. like i said, the big news as of late is that we've moved. we're no longer in west littleton, we now reside in a city a bit east of there called lone tree. its about 20 min south of downtown denver. its great. slowly turning into our newest home. i'll get some pictures up soon.

peter and i also BOTH celebrated our birthdays in august, so that was another fun event. he got me a gift where i was able to be a "sou chef" for a day in a fresh market in downtown, which was AMAZING to say the least. what an experience. such fun! who knew that when you cut a pepper, your NOT supposed to take your knife and cut a circular whole in the top to pull of the stem. Nope. You're actually supposed to slice it down the side in quarters. after the last cut, the top just left. and BAM...no having to stand and slowly maneuver that part out. i also got to make a flour-less choc. torte and some fresh baguettes. wish i had a photo to share but somehow it vanished off my camera card.

peters birthday we celebrated by going to a Brazilian steakhouse about 40 min from here. he had no idea we were going and was super excited to say the least. i also made him his favorite dessert, choc. pecan pie. (photo below) it was lots of fun. i can't believe just a few years and we'll be celebrating 30! :) (shhhh....don't tell him i spilled the beans) 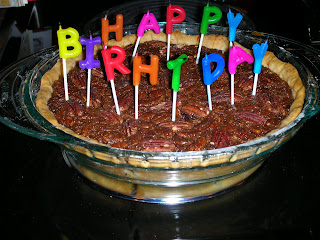 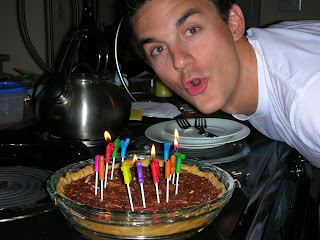 well folks, thats it for now. next post will be coming shortly...this time from the peter man himself.